History Of The Gutenberg Bible

Johann Gutenberg (a.k.a. “John Gutenberg”) wasis supposed to have been born 1398—1399 at Mainz of well-to-do parents, his father being Friele zum Gensfleisch and his mother Elsgen Wyrich, whose birthplace “Gutenberg”, was the name he adopted. The books from which Gutenberg learned to read as a young boy were not like books today; they were written by hand. A better name for them than books is "manuscripts," which means "hand-writings." While Gutenberg was growing up a new way of making books came into use, which was a great deal better than copying by hand. It was what is called block-printing.

The printer first cut a block of hard wood the size of the page that he was going to print. Then he cut out every word of the written page upon the smooth face of his block. The letters were inked, paper was laid upon them and pressed down. With blocks the printer could make copies of a book a great deal faster than a man could write them by hand. But the making of the blocks took a long time, and each block would print only one page.

Gutenberg determined to contrive a better way of printing. While living in Strasburg, Gutenberg found a room in an old monastery to use as his private workshop. Day after day, he tried different approaches to moveable-type printing, but his efforts did not meet with success. At last the time came when he had no money left. Gutenberg went back to his old home, Mainz, and there met a rich goldsmith and lawyer named Joahann Fust (or Faust). Gutenberg told him how hard he had tried in Strasburg to find some way of making books cheaply, and how he had no more money to carry on his experiments. Fust became greatly interested and gave Gutenberg the money he needed.

First of all it is thought that he made types of hard wood. Each type was a little block with a single letter at one end. Such types were a great deal better than block letters. The block letters were fixed. They could not be taken out of the words of which they were parts. The new types were movable so they could be set up to print one page, then taken apart and set up again and again to print any number of pages. But type made of wood did not always print the letters clearly and distinctly, so Gutenberg gave up wood types and tried metal types. This worked much better, and Gutenberg was progressing well toward the completion of the first book ever printed by movable type: the Bible in Latin. 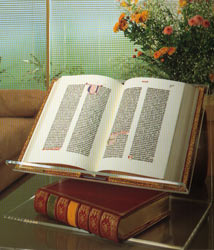 Fust, however, was losing patience. He quarreled with Gutenberg and said that he was doing nothing but spending money. At last he brought suit against him in the court, and the judge decided in favor of Fust. So everything in the world that Gutenberg had, even the tools with which he worked, came into Fust's possession. Soon a Latin Bible was printed. It was in two volumes, each of which had three hundred pages, while each of the pages had forty-two lines. The letters were sharp and clear. They had been printed from movable types of metal. The news that books were being printed in Mainz went all over Europe. Before Gutenberg died, printing-presses like his were at work making books in all the great cities of the continent.

Between 1450 and 1455, the Gutenberg Bible was completed. Early documentation states that a total of 200 copies were scheduled to be printed on rag cotton linen paper, and 30 copies on velum animal skin. It is not known exactly how many copies were actually printed. Today, only 22 copies are known to exist, of which 7 are on velum. If an entire Gutenberg Bible should become available on the world market, it would likely fetch an estimated 100 million dollars! Even an individual leaf (a single two-sided page) from the original Gutenberg Bible can fetch around $100,000. Gutenberg’s work is the most rare and valuable printed material in the world. 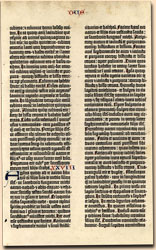 Johann Gutenberg died in Mainz, Germany in 1468. Ironically, the inventor of the most mportant invention in history never profited from his invention and died in poverty… though the proceeds from the sale of just one single leaf from his Bible in today’s market would have provided Gutenberg with enough money to live out his last years comfortably. While Gutenberg sadly went without reward for producing the machine that changed the world, history recognizes him as holding this honor.

Read More of the History of the Gutenberg Bible Today